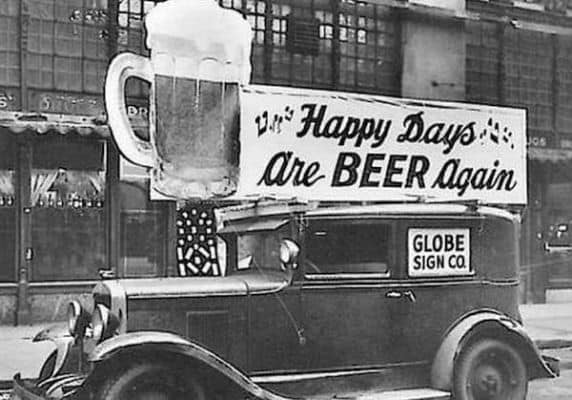 On January 16, 1919, Congress ratified the 18th Amendment to the U.S. Constitution with the passage of the Volstead Act, or National Prohibition Act, over President Woodrow Wilson’s veto. The Volstead Act provided for the enforcement of prohibition. On December 31, 1919, the production and distribution of all beer and distilled products across the country ceased and on January 17, 1920, one year and a day after the ratification, prohibition went into effect. Our nation officially became dry and the manufacture, sale, or transportation of intoxicating liquors for beverage purposes was prohibited.

At the time of ratification, there were approximately 2,000 breweries operating across the country, which would have been defined by today’s standards as craft and nano-breweries. York City featured 2 breweries: the 4-story Helb Brewery on the northwest corner of Queen & King Streets, and the Karl E Katz’s Brewery. With significant funding, the beer industry mobilized “wet” supporters largely from the Catholic and German Lutheran communities in opposition to the ratification. Their campaign proved unsuccessful as a result, in large part, of the nation’s war against Germany and the marginalization of the American-German community.

On January 17, 1920, York went on the wagon with the rest of country. The York Daily newspaper reported that day many of the local hotels and barrooms were giving away beer and liquor to their customers versus destroying the products.

The end of the Katz brewery quickly followed the beginning of prohibition. Helb, however, retrofitted his iconic Queen & King Street site into a bottling plant as well ice production and continued to operate for another 13 years and 2 months until the newly elected President Franklin D. Roosevelt, now in the midst of The Great Depression, ratified the 21st Amendment to abolish the Volstead policy. At the time, the new ratification only permitted the brewing of 3.2 percent beer, but, hey, the dry spell was over with distribution and sales beginning on April 7, 1933, marking the anniversary of National Beer Day.

Back home, the Helbs reopened the brewery and continued to produce beer until the late 1940s, when a tractor-trailer and train service with improved pasteurization and refrigeration techniques changed the beer industry throughout the country.

Unfortunately, the effects of prohibition on the beer industry, despite its abolishment, continued for decades. In the years following the ratification of the 21st Amendment, a mere 300 breweries operated around the country. By the mid-1970s there were less than 100 with mass-market companies dominating the scene. As America’s tastes turned to craft beer, though, the brewing scene expanded dramatically. There were roughly 1,500 breweries in 2008, and 3,500 by early 2015. By the end of 2016, the number of breweries around the country topped 4,131, which had been the all-time high set back in 1873. Those numbers continue to steadily grow, reaching almost 6,500 breweries in 2017 and 7,346 breweries at the end of 2018.

This craft beer trend is equally reflected in York County, featuring 6 breweries in York City alone and nearly 20 throughout the county giving York County the distinction of most craft breweries per capita in the Mid-Atlantic region.

So, we encourage you to enjoy your favorite York County craft beer this weekend, and from the YCAT Crew to all of you, we wish you a Happy National Beer Day!